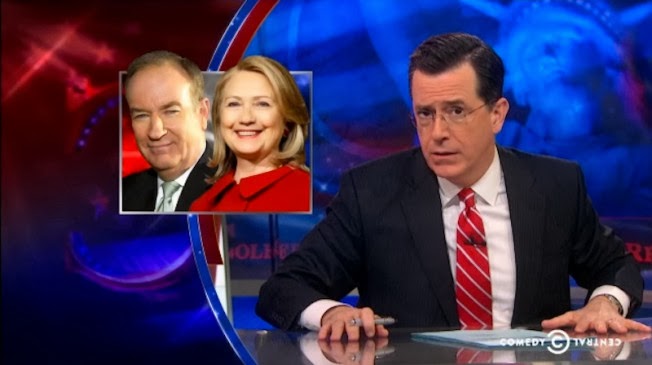 We all know that since Republican presidential candidates have an uncanny ability to get caught in embarrassing scandals and to trip over themselves left and right, Fox News will do whatever it can to try to discredit Hillary Clinton, their most feared opponent, before the next election. They exaggerated the whole Benghazi thing way out of proportion, and they dragged it out way longer than the evidence actually allowed, and since that couldn't work anymore, they have predictably turned to the desperate and misogynistic tactics we all knew they would eventually resort to, 'wondering' if maybe she's too old to run the country. Of course, they have never brought up the question of men's advancing age as a requisite or condition to be able to perform their professional functions and obligations: John McCain, Bill O'Reilly, Rush Limbaugh, and even their demi-god Ronald Reagan are/were all older than Hillary...

Now, I'm no fan of Hillary. I think she has sold out to corporate, Wall Street and banking interests, and has probably lost sight of some of the most important liberal ideals and principles she ought to stand up and fight for. I would much rather see Elizabeth Warren run for president on the Democratic side. But whatever reservations one may have with Hillary, none of them ought to have anything to do with the fact that she's a woman, and we certainly should not subject her to standards that we don't equally expect from every other candidate, despite their race, sex shape, color, etc.

The Colbert Report
Get More: Colbert Report Full Episodes,Video Archive
And of course, instead of backing down when it's so clear the intentions here are misogynistic, Bill O'Reilly just doubles down and pretends not to be a chauvinist pig, demonstrating in the process what a chauvinist pig he really is...


- The Evolution Of The Y-chromosome In The Colbert Report
Though I like to try to keep up with scientific developments, and consider myself relatively literate (for a layman) in these matters, there are times when I am truly surprised at the fact that something I thought I basically understood turns out to be...