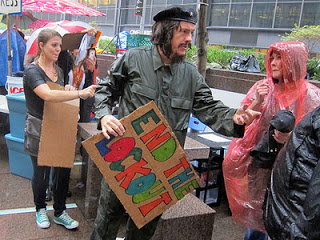 Inspired by Dick Armey and how he co-opted the Tea Party and gave their fringe beliefs a national platform, Comrade Che Colbert wants his Super PAC to capitalize on the growing Occupy Wall Street movement.

So, he met with two young idealists whose democratic, political and social awareness, while admittedly quirky, demonstrate a level of intellectual sophistication you just don't see among tea-baggers.

In the process, Colbert managed to produce a hilarious interview showing his off-the-cuff comedic genius:

- Colbert And The Dirt Bike Badass In The Lincoln Tunnel
Let's face it, no one likes to commute... I don't know how I would survive my commute to work, or at least retain my sanity, if it weren't for books and an ipod full of books and podcasts. But among all the repetitive daily drudgery of traveling...