﻿ The Evolution of the Y-Chromosome in the Colbert Report
Philosophy

The Evolution of the Y-Chromosome in the Colbert Report 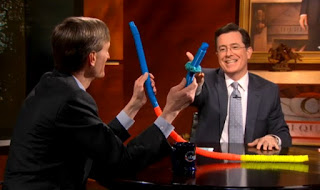 Though I like to try to keep up with scientific developments, and consider myself relatively literate (for a layman) in these matters, there are times when I am truly surprised at the fact that something I thought I basically understood turns out to be different and much more interesting than I previously realized.

The Colbert Report
Get More: Colbert Report Full Episodes,Political Humor & Satire Blog,Video Archive
I wonder how Freud would have tried to spin this size difference with some ad hoc envy theory :)

- Herman Cain's Nine Nine Nein Nein Plan
I don't know why it is that (with the possible exception of John Huntsman) virtually every Republican candidate does better with their base whenever they make irresponsible, racist, bigoted and divisive remarks, or when they dismiss the value of education,...