﻿ Dawkins on The Daily Show? Fuck That: Metallica on Colbert!
Philosophy

Dawkins on The Daily Show? Fuck That: Metallica on Colbert! 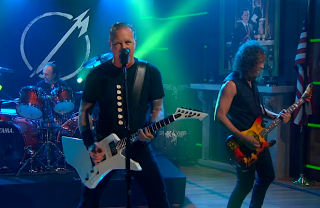 So apparently the blogosphere is awash with entries about the interview Richard Dawkins did with Jon Stewart a couple of days ago. I love Dawkins, and was thinking about posting that interview here, but when I realized Metallica had made an appearance at the Colbert Report, I came to discover my true loyalty :)

Anyway, this first clip with Father Jim about Pope Francis' views may seem to have nothing to do with Metallica, and it really doesn't, but it will help you make sense of something that happens later:

The Colbert Report
Get More: Colbert Report Full Episodes,Video Archive
And you can't call it a night until you've had your breakfast on a mirror...