﻿ Mechanical robots of the past...they were supposed to be beneficial
Philosophy

Mechanical robots of the past...they were supposed to be beneficial 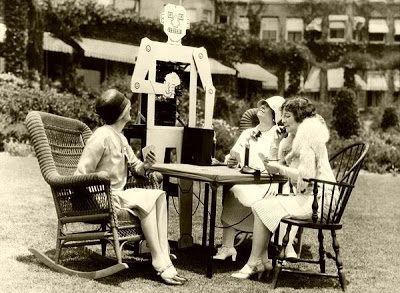 The perfect bridge partner, Mr. Televox, the mechanical man, makes a fourth at the Huntington Hotel during the convention of the Pacific Coast Electrical Association in 1928.

"The Automatons of Yesteryear"
by
Katie Hiler
October 28th, 2013
The New York Times
The metallic monster had slanted, yellow eyes, skin like a suit of armor, and the halting, unsteady movements of one of Frankenstein’s creations. On a bright September day in 1928, a curious crowd of onlookers got their first glimpse of Eric the Robot. The mechanical man rose from his chair, stretched out an arm for silence, and made a speech, of which few people understood more than a few words. In a special cable to The New York Times, one reporter remarked on the event, held at the exhibition of the Model Engineer’s Society of London: “Of all orators, Eric seemed the coldest and most lacking in magnetism.”

While he may have been the first robot many Londoners had ever seen, Eric was just one of many humanoid machines on the scene in the early 20th century. Advances in technology and engineering had finally caught up with a human need to play God and create a man from metal parts – a desire stretching back at least as far as da Vinci’s “mechanical knight.”

In 1926, Westinghouse Electric Corporation introduced the world to Televox, a robot that could obey a human voice. Mr. Televox, as the public knew him, was followed by a number of other simple robots, including a humanoid known as Elektro (and his canine robo-companion, Sparko), which was exhibited at the 1940 World’s Fair. Many of these early robots were designed to perform crowd-pleasing tricks like smoking a cigarette, firing a revolver or whistling a tune. Most were just made of gears and levers, voiced and controlled by their Ozian creators behind the curtain.

But to R.J. Wensley, the engineer behind Televox, the modern robot was capable of more than just trivial entertainment – it could be put to real use. Televox was in many ways the product of a new approach to industry. The Industrial Revolution had nurtured the mind-set that machines could do some jobs better than men — more quickly, more accurately, and with greater safety.

At least three of Mr. Wensley’s robots were employed as substitutes for watchmen at reservoir substations across Washington, D.C. And he wasn’t ready to stop there. “In time to come the only work to be done by men and women will be that which requires faculties of discernment, discretion, and judgment,” Wensley was quoted as saying in 1933. “All other work – anything repetitive, routine, standardized – can better be done by machines.”

Yet even as technology was making robotic stand-ins for our most boring jobs a reality, scientists and engineers were already wondering whether it would be possible to invent a machine mind that could learn the human faculties that Mr. Wensley said set us apart.

Of course, to attach a robot to the computers of the 1960s — mainframes the size of entire rooms — would be laughable. And the human brain itself still resembled the dark, unexplored surface of a distant planet. The robotic brain will have to develop for years and years before the robotic body can merge with it.

Still, the unbounded imagination and deluded thinking of early robot makers, believing in the possibility of the technology of their time, laid the groundwork for today’s research. Many of the pioneers likely followed the credo of Thomas A. Edison, a father figure to so many American inventors, when he said in 1915: “To invent, you need a good imagination and a pile of junk.”


- Assorted Robots
Here is a collection of robots from the 1970's back as depicted through advertising, television, and motion pictures. Identification is made when possible and the sequence is random except for category. Motion pictures... Chani from Devil...