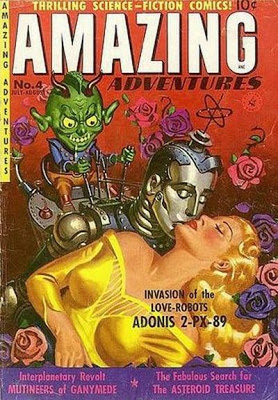 "Tomorrow’s Romantic Robots could Capture our Hearts"
by
Dick Pelletier
April 29th, 2012
Instititute for Ethics and Emerging Technologies
Although many today might find the idea of romance with a machine repulsive, experts predict that as the technology advances and robots become more human-like, we will view our silicon creations in a much friendlier light.

By 2025-to-2030, robots are expected to fill rolls as caregivers and servants, as well as avatars that manage our auto-drive cars, automated homes, and complex entertainment systems.

James Irvine and Sandra Schwarzbach, in a recent Futurist Magazine article, predict that the world will predominantly be driven by two fields: robotics and biotech. These areas will surpass information technologies by 2025, and dominate science research over the next 50 years.

Today’s machines can vacuum our homes, stand in as pets, explore planets, and assist in surgeries. Future ‘bots will do much more. Think brain-machine interfaces that allow handicapped patients to control prosthetic limbs. Or imagine swarms of mosquito-size flying ‘bots that can search collapsed buildings for trapped victims; and spy on terrorists holding people hostage, then relaying Intel back to authorities.

Technologies to build robots that perceive their surroundings, move themselves, and perform tasks without human oversight should reach fruition by 2030 or before, experts say. By 2035, our silicon friends could exhibit human-like consciousness with flesh-like skin; and possess traits vital for a loving partner.

Jason Nemeth, in his essay Should Robots Feel, believes love-companion robots will be practical in the future, and may one day satisfy all our intimate desires. Nemeth is not sure whether human/robot love will experience higher success rates than love between two humans, but he says tomorrow’s robots will unlock the possibilities, and a few bold humans willing to experiment will take it from there.

Carnegie Mellon’s Hans Moravec believes that by late 2020s, we will create robots in humanoid form, powered by fuel cells and cooled by a squeeze pump that beats like a heart with alcohol cooling its circuits. Robots would ‘drink wine’ for fuel, breathe air like us, and appear amazingly human-like.

Design tricks like these, along with soft ‘nanoskin’ will make tomorrow’s ‘bots seem uncannily human, encouraging us to perceive them as friends. Author Ray Kurzweil says tomorrow’s ‘droids could quickly learn to flesh out our positive feelings, providing an addictive allure almost impossible for us to resist.

David Levy, author of Love and Sex with Robots, predicts that as robots become more sophisticated, growing numbers of adventurous humans will enter into intimate relationships with these intelligent ‘bots.

A robot partner would be the perfect mate, never showing boredom or being inattentive, Levy says. You will always be the focus and centerpiece of their existence and you never need worry about their being unfaithful or going astray, because loyalty and being faithful are embedded in their programming.

What about the seamy side of, say, robo escorts. Would this be legal where human prostitution is not? Would we call it infidelity if a spouse indulges in robot passion? In addition, how will religious supporters react to confirmation that the deepest human thoughts and achievements can be duplicated in machines?

Levy doesn’t deny that romantic robots won’t pose problems. In fact, at first, robo-loving may only appeal to loners and misfits, he says; but that really shouldn’t matter. There are millions of lonely people without regular sex lives or relationships. A world where everyone has someone to love and to be loved would raise happiness levels everywhere. It could even be instrumental in achieving global peace.

However, there are robots rights issues to consider. Tomorrows ‘bots may prompt lawmakers to make it illegal to ‘turn off’ a robot without their permission. In addition, should robots and humans marry? If future robots can evoke true love, robo-human marriages might one day become legal and socially acceptable.

As wild as human-machine relationships might seem today, there are reasons to think that love and sex with robots will happen. Robots are already better in math, logic, chess, and games like Jeopardy. With an intelligent mind, and a beautiful sexy human-like body, these ‘bots could easily capture our hearts.

This romantic robot journey winds around unknown turns; but whether you love it or hate it; strong commercial support insures that this futuristic world will be ours to experience. Comments welcome.

The all-singing, all-dancing female robot that can now be operated using just a mouse

- Remember...robots Feel No Pain And Are Stupid
io9... Dubbed “doodlebugs” by the Allies, the Goliath was a remote-controlled demolition carrier. It was introduced by the Germans in 1942 who used the device to transport a 165 pound bomb to a target, which typically included tanks, dense infantry...