﻿ Humanoid robots...where are they?
Philosophy 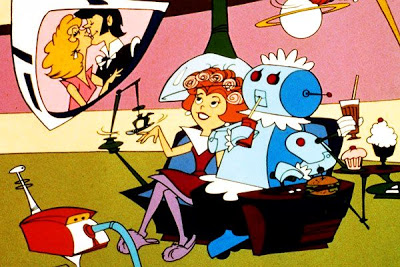 "Where’s Our Rosie? Why We Don’t Have Domestic Robots Yet"

What it will take to develop a multitasking, humanoid domestic robot—and whether we even really need one.

On The Jetsons, Rosie was the robot maid with a heart of silicon and the voice of an aging cocktail waitress. She did everything: cook, clean, take care of the kids. Today, a robot can help you disarm a bomb in Afghanistan, but it can’t make you an omelette.

So, where is our Rosie? Why don’t we have robots in our homes that can do the cleaning, cooking and housework that we don’t want to do? Sure there are robots that can mow your lawn, clean your pool and vacuum your floors, but nothing like the do-it-all domestic robot that helped George, Jane, Judy and Elroy go about their daily lives.

Recently Greg Shirakyan, the Microsoft Robotics developer responsible for the roaming party photographer robot, penned a fascinating blog post exploring the question “What is a household robot?” His definition: “A device that can intelligently move parts or all of itself around a home and do useful stuff” and that is “not being continuously controlled by a person, and not getting stuck.” Simple, right?

Not quite. Shirakyan points out that our homes are set up to accommodate full-grown human beings. We make minor adjustments for children and pets because we are emotionally attached them. Thus, we have two options: reconfigure our homes to accommodate appealing, useful robots or create robots advanced enough to navigate and manipulate environments made for us.

Let’s posit that our end goal is some variation of Rosie, a humanoid, multi-tasking domestic robot that takes commands through speech and visual cues. What, exactly, is holding us back?

One reason you don’t have a robot housekeeper is that robots just aren’t that smart right now. Not that they can’t perform complicated tasks, it’s just that they can’t perform them autonomously. While footage of Honda’s ASIMO pouring a fresh glass of juice is impressive, you probably don’t have time to lay out a thermos of juice and a cup on a tray every morning; if you did, you’d probably just pour yourself the juice and save the robot the trouble.

Let’s put it this way: If you had a butler and you asked him to make you a sandwich, clean your bedroom and do your laundry, you’d be pretty annoyed if you had to take all of the ingredients out of the refrigerator for him, lead him by hand to your bedroom to clean it and then separate all of the colors in your laundry basket before letting him put your clothes in the washing machine.

Make no mistake, there have been some amazing advances in robot autonomy lately. It’s just that the human standard for autonomy is pretty high—a 7-year-old learning about responsibility can take on more household chores than even the most advanced robot.

Metal! Good for strength and durability, not so good for fragile human skin and fine china. Imagine Little Tommy accidentally running into a 120 lb. aluminum robot in the hallway and you can see why homeowners would be reluctant to buy the Chore-Bot 2000. Not to mention that most robots today work in factories, where their hard grips are an asset, not a liability like they’d be in a home full of breakable eggs and wine glasses.

That’s why researchers are working to create machines out of softer materials that would leave grandma unharmed if her robot was on the fritz. Earlier I covered the research of Eduardo Torres-Jara of Worcester Polytechnic Institute, who is working on a soft robotic arm with tactile sensors on its fingertips that could handle delicate objects and be manipulated by human hands, meaning you could gently pull its fingers apart if it grabbed something it wasn’t supposed to without fearing for your safety.

This also has ramifications when it comes to people accepting and even embracing a robot presence in their homes. No one wants the Terminator walking around their kitchen. But a soft, cuddly robot that you could store in your closet? Much more appealing.
Cost

Robots have to be cost-competitive with human labor if any company hopes to sell them on a large scale. According to the Bureau of Labor Statistics, the average salary for a housekeeper last year was $21,150. Willow Garage’s PR2, which one UC Berkeley professor programmed to fold laundry, sells to researchers for $400,000.

Let’s say in the future they could drastically improve its capabilities and keep it at the same price point. You’d still have to own the robot for nearly 20 years before you could justify its cost compared to a housekeeper’s annual wage, not counting any maintenance or updates that might be required.

We may never have the equivalent of Rosie the Robot in our lives, both because such a robot would be incredibly complicated and expensive and because, quite frankly, we might have no need for it.

“The idea that a humanoid robot with arms would push a vacuum cleaner is an image that has set many expectations and, in some ways, has set back the industry,” says Colin Angle, CEO of iRobot. The man knows a thing or two about robots, considering the Roomba has sold more than 6 million units worldwide, making it by far the most widely adopted domestic robot ever invented.

“I get frustrated with the ‘great demo’ that has no economic value,” he says. “I am a vigorous proponent and champion of growing the robot industry. What we need to do is solve problems people are willing to pay for at a price point lower than what they were initially willing to pay. And that’s actually really, really hard.”

Robots like ASIMO and Boston Dynamics’ PETMAN look really cool but, honestly, who really needs something like that in their home? A $300 disc that can vacuum your floor by itself is pretty amazing when you stop and think about it.

The future is much more likely to be a bunch of simple, inexpensive robots performing different household tasks than a single, wisecracking robot maid that will do everything. It might not be Rosie, but look at it this way–at least you won’t have to do any housework.

- Human Empathy For Robots, Cyborgs, Humanoids?
"Humans feel empathy for robots" April 28th, 2013 SpaceDaily  From the T-101 to Data from Star Trek, humans have been presented with the fictional dilemma of how we empathize with robots. Robots now infiltrate our lives, toys like Furbies or robot...