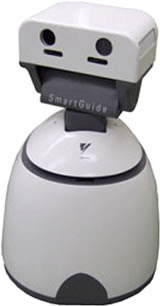 It may not be too long before visitors are greeted by a robotic receptionist in Japanese Smart Office Buildings. Shimizu Corp and Yasukawa Electric Corp have opened the "Smart Showroom" that is part of the Smart Robotics Building Project, which will demonstrate the use of Smart Robots in intelligent buildings.

The project is designed to provide various services by combining building infrastructure technologies and robot technologies. Robots will take on the role of receptionist, guards, office cleaners, etc and replace humans. For example, in the role of a receptionist, they will greet visitors, attend to them and show them to their destination.

In the first step of the project, Shimizu Corp is responsible for the infrastructure technologies and Yasukawa Electric Corp developed the Smart Guide. In the Smart Showroom both companies, utilizing their technologies, demonstrates how the robot attends to visitors, takes care of all their needs, and sees them off.

This concept is not meant to rely on robots for all functions but would be a combination of all technologies with the intervention of humans for device control, information and telecommunication technologies. All this will be centrally located within the building so that the robots, operating in the building, can be tracked so that multiple robots can share work load in a large area.

We have enough trouble communicating with outsourced technical support systems and now we must interact with robotic receptionists, guards, office cleaners? Leave robotics to tedious and dangerous tasks.

Someday we may have to deal with... 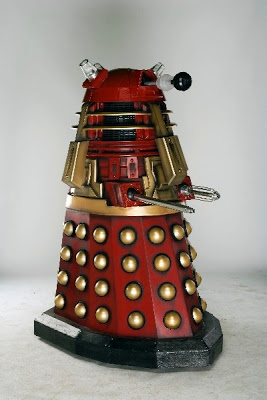 The evil Dalek from Dr. Who


- Remember...robots Feel No Pain And Are Stupid
io9... Dubbed “doodlebugs” by the Allies, the Goliath was a remote-controlled demolition carrier. It was introduced by the Germans in 1942 who used the device to transport a 165 pound bomb to a target, which typically included tanks, dense infantry...

- Human Empathy For Robots, Cyborgs, Humanoids?
"Humans feel empathy for robots" April 28th, 2013 SpaceDaily  From the T-101 to Data from Star Trek, humans have been presented with the fictional dilemma of how we empathize with robots. Robots now infiltrate our lives, toys like Furbies or robot...