﻿ A larger piece of Pi--Tau
Philosophy

A larger piece of Pi--Tau 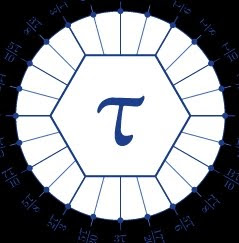 The mathematical constant pi is under threat from a group of detractors who will be marking "Tau Day" on Tuesday.

Tau Day revellers suggest a constant called tau should take its place: twice as large as pi, or about 6.28 - hence the 28 June celebration.

Not all fans of maths agree, however, and pi's rich history means it will be a difficult number to unseat.

"I like to describe myself as the world's leading anti-pi propagandist," said Michael Hartl, an educator and former theoretical physicist.

"When I say pi is wrong, it doesn't have any flaws in its definition - it is what you think it is, a ratio of circumference to diameter. But circles are not about diameters, they're about radii; circles are the set of all the points a given distance - a radius - from the centre," Dr Hartl explained to BBC News.

By defining pi in terms of diameter, he said, "what you're really doing is defining it as the ratio of the circumference to twice the radius, and that factor of two haunts you throughout mathematics."

The discrepancy is most noticeable when circles are defined not as a number of degrees, but as what are known as radians - of which there are two times pi in a full circle. With tau, half a circle is one-half tau.

Dr Hartl reckons people still use degrees as a measure of angle because pi's involvement in radians makes them too unwieldy.

He credits Bob Palais of the University of Utah with first pointing out that "pi is wrong", in a 2001 article in the Mathematical Intelligencer .

But it is Dr Hartl who is responsible for the Tau Manifesto - calling tau the more convenient formulation and instituting Tau Day to celebrate it.

Kevin Houston, a mathematician from the University of Leeds, counts himself as a convert.

"It was one of the weirdest things I'd come across, but it makes sense," he told BBC News.

"It's surprising people haven't changed before. Almost anything you can do in maths with pi you can do with tau anyway, but when it comes to using pi versus tau, tau wins - it's much more natural."

Dr Hartl is passionate about the effort, but even he is surprised by the fervent nature of some tau adherents.

"What's amazing is the 'conversion experience': people find themselves almost violently angry at pi. They feel like they've been lied to their whole lives, so it's amazing how many people express their displeasure with pi in the strongest possible terms - often involving profanity.

"I don't condone any actual violence - that would be really bizarre, wouldn't it?"


- Hans Hahn And Intuition
Today is the birthday of Hans Hahn, the Austian mathematician who, along with his brother-in-law-to-be Otto Neurath, started the Vienna Circle of Logical Positivists. He was a philosophically-minded mathematician at a time when the foundations of math...

- It's A Round, Round World
On Columbus Day, it is probably worth discussing the fact that contrary to the storybook version of history that is part of our contemporary mythology, it was well-known in classical times that the world was, in fact, round. We should start with the...

- The Story Of Maths - The Genius Of The East
Our ordinary conception of the history of maths (did I just sound British?) is that it started in Egypt and Babylon, got perfected in Greece, and then very little happened for centuries until Europeans took the baton and got things going again. And now...

- Pi Rounded To 3...april Fools?
Question...In Science magazine a while back an article about the latest attempts to calculate pi to the umpteen zillionth decimal place made a passing reference to a curious Oklahoma law. It said Oklahoma legislators had passed a law making pi equal to...

- African Einstein...implementation Has Begun
"Seeking an African Einstein" by Matin Durrani July 2nd, 2008 physicsworld.com A new postgraduate centre for maths and computer science has opened in the Nigerian capital of Abuja as part of an ambitious plan to find the "next Einstein" in Africa....