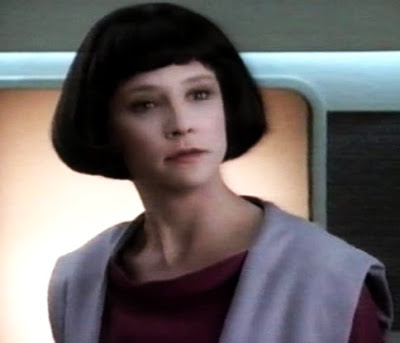 Lal
I have not seen the new Star Trek and probably won't. I have seen the movies of the past and the television "spin offs"...not impressed by the theatrical films; impressed by the likes of Star Trek: Next Generation especially concerning "The Borg" and "Q" as well as Data's interactions with the crew. The spirit of the original series was well-maintained...issues and ideas were explored as well as other worlds. A pity the series ended. Marc Bain from Newsweek has written an interesting article on Star Trek ethics, the original series, and the current film.

From a previous post [ Ethics: Robots, androids, and cyborgs ]...


When you are contemplating this topic consider the character "Data" from Star Trek: Next Generation, and recall the 1990 episode [#64] called "The Offspring" whereby Data has created a daughter called "Lal". Lal is capable of perception and feeling and given Data's "software" of ethics by "neural transfers". But Lal has some problems with citizens of the star ship. Befriended by Guinan she is introduced to the inhabitants of "Ten Forward" to broaden her social intercourse. Data and Captain Picard are embroiled in a discussion regarding Lal's removal from the star ship when they are interrupted by an emergency message from Counselor Troi. Lal is dying...her functions broke down after experiencing an extraordinary gamut of feelings in the counselor's presence. All attempts to save Lal fail and she succumbs to what we humans all must face--DEATH. Curiously, Lal's demise may have been contributed to a more advanced stage of sensitivity and she was unable to interface the new feelings with the supplied software. Consider Data's inability to experience the grief and emotion the crew feels at Lal's loss and must be content to have only memories of Lal. Data may well be equipped with a sense of ethics when dealing with human issues of loyalty, responsibility, self-sacrifice, etc., but he, and all androids of his caliber, may never fully integrate the full range of human emotions--well beyond the ethics.

The original 'Star Trek' series dealt with important issues of the day, while the new film is all explosions and action.

Newsweek
Despite whatever robots and aliens roam the landscapes of science fiction, the genre's real subject has always been people. Since "Star Trek" first hit the airwaves in 1966, the show has worked as part of this tradition, using extraterrestrial settings to ask ethical and philosophical questions about the way people behave. In this way, the TV series commented on most of the big issues of the past 40 years: war, sexism, racism, animal rights, the environment, religion, sexuality.

In an episode titled "Plato's Stepchildren," for instance, Captain Kirk tells a slave who's been treated unfairly because of his appearance, "Where I come from, size, shape or color makes no difference." This was in 1968, when the civil-rights movement was still very much battling for equality, and only seven and a half months after Martin Luther King Jr. was assassinated. It was also in this episode that Kirk and Lieutenant Uhura, played by the actress Nichelle Nichols, who was black, shared television's first (fictional) black-white interracial kiss.

"[Star Trek] motivated us to think about things that most people either don't think about or take for granted," says Judith Barad, a professor of philosophy at Indiana State University and coauthor of "The Ethics of Star Trek." "I think—and this is why it's lasted—it gave us a vision of hope for the future, a goal that we could all aspire to."

The latest film version of "Star Trek," however, is more brawn than brain, and it largely jettisons complicated ethical conundrums in favor of action sequences and special effects. The film shows the beginnings of the Enterprise crew, tracing how Kirk, Spock and the others came together. All the character quirks are there, and the Enterprise is rendered more realistically than ever, but what's missing are the typically progressive politics and moral dilemmas that made the original "Trek" more than a space-age adventure show and helped earn it legions of ardent fans. Where the series often condemned conflict and advocated forgiveness, the new film depicts a violent and war-torn future, reveling in big explosions and revenge. In one noteworthy scene, an offer of mercy to the villain by the Enterprise crew becomes an apparently pleasurable opportunity for retribution, leading to a screen full of twisting metal and laser fire.

Not that earlier iterations of "Star Trek" never indulged in laser battles, but the high points of the series generally involved stories that focused on sophisticated philosophical or ethical ideas. In one fan favorite, an episode from "The Next Generation" titled "I, Borg," the Enterprise discovers a wrecked ship and its lone survivor, an adolescent Borg. The Borg are an alien species that, though made up of individuals, act as a single consciousness, connected to each other through a cybernetic network. They have a history of belligerence, having once kidnapped Captain Picard and attacked and virtually wiped out the race of another character, Guinan, played by Whoopi Goldberg. Much of the episode focuses on Picard and Guinan struggling with their impulse to destroy the Borg. As the Borg, cut off from the collective mind, begins to recognize itself as an individual, so do Picard and Guinan. The drama is mostly internal, and the main themes are empathy and forgiveness. It is, in a sense, the antithesis of the new movie.

"'Star Trek' is not about the special effects. It's about the human condition," says Susan Sackett, who was a longtime assistant to "Trek" creator Gene Roddenberry and a production associate on several "Trek" projects. "There were lessons to be learned in a lot of the episodes, and people were better for it."

Science fiction, by nature, comments on the time in which it's made, postulating a future that is either better or worse depending on what we make of the present. When "Trek" first appeared, race relations, the women's movement, the Vietnam War and the Cold War were key social issues, and the show dealt with all of them, even if obliquely. Lieutenant Uhura was the first black female character on television with a major role. One crew member, Pavel Chekov, was Russian, even though the Soviet Union was considered the biggest threat to the U.S. in the 1960s. Even the crew's first rule of conduct, the Prime Directive, essentially stated that they were not to interfere in the development of other cultures. According to Sackett, that was Roddenberry's way of criticizing U.S. involvement in Vietnam.

Roberto Orci, who co-wrote the script for the current film with Alex Kurtzman and whose previous projects include "Transformers" and "Mission: Impossible III," doesn't agree that the ethical questions that were so prominent in "Star Trek's" history are absent from the new movie. "The whole movie is an exploration of what it is to cheat." (Cheating is, in fact, one theme in the film.) According to Orci, who says he's a "Trek" fan, the goal of the film was to introduce the characters to a new generation of fans while satisfying longtime Trekkers. To do this, the movie's creators had to choose which aspects of the old "Trek" to keep and which to lose. What went was an image of the future in which war, if it occurs, is with alien races, not between humans. "Some of the complaints about [earlier versions of] "Star Trek" have been that it got a little bit too utopian," he says.

"Trek" wasn't always that way. "The City on the Edge of Forever," from the original series' first season, has as an important plot point an alternate timeline in which an antiwar activist inadvertently helps Nazi Germany win World War II. It's also true that the original series was sometimes guilty of the vices it chastised. The women of the Enterprise wore miniskirts and go-go boots; Kirk was always sleeping with conspicuously attractive female aliens; and the show's main heroes—Kirk, Spock and McCoy—were all white men. And some critics have argued that the ethical points were often handled obviously. Sci-fi writer Orson Scott Card says that in the best fiction, these points are incorporated beneath the surface of the story, and that makes them more effective. In "Trek," they were blunt, a sign that the writing was poor, he says: "[Ethics] are obviously being discussed, which is why Roddenberry is given so much credit for being so deep. It's simply proof that he was incompetent at it."

Still, the show's hopeful tack—artful or not—was groundbreaking for its time and resonated with generations of viewers. Orci says he and Kurtzman deliberately tried to make the new "Star Trek" reflect its time in the same way the original series did during the '60s. "We consciously, without trying to hit it over the head, related [the movie] to the recent events of this decade, [one of the biggest] being September 11," he says. Maybe so. But their vision of our time is perhaps less optimistic than Gene Roddenberry's original, 40 years ago, and the big moral lessons are nowhere to be found. Sure, it's just a summer blockbuster, but by leaving out the spirit of ethical inquiry, the new "Trek" isn't true to the show, or its fans.

The Ethics of Star Trek


- "starlog" Magazine Is Available For Free At Internet Archive
Internet Archive... Starlog was a monthly science-fiction film magazine published by Starlog Group Inc. The magazine was created by publishers Kerry O'Quinn and Norman Jacobs. O'Quinn was the magazine's editor while Jacobs ran the business...

- Are Dreams Necessary?
One of those rare episodes where the crew of the Enterprise [Star Trek: The Next Generation] is not having confrontations with the Ferengi, Cardassians, or the Borg and instead deal with a thematic idea who according to Counselor Deanna Troi claims that...

- The "dyson Sphere"
At any given moment an episode of the multiform Star Trek is on some television channel. I once thought that of the entire series that Star Trek: Next Generation was the number one place holder followed by the original Star Trek. Now I am not so sure...

- "star Trek" And Cultural Relativistic Ethics
Gene Roddenberry...a cultural relativist [no absolutes]? It has been stated in many places that Gene Roddenberry embraced the varieties of all cultures that "[By the 23rd century, we] will have learned to take a delight in the essential differences between...