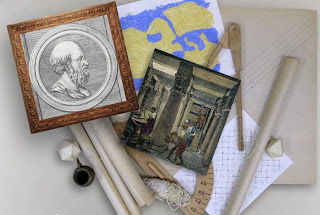 We live in a world in which we presuppose as a given that great scientific discoveries require the existence of great, expensive technological equipment: lasers, the Large Hadron Collider, microscopes, computers, the Hubble and Kepler telescopes, synchrotrons, super-duper cameras, you name it...

But more than great technology, the real secret to discovery is creativity, because creativity helps you make good use of whatever tools are actually available to you, even if they happen to be, as in the case of Eratosthenes, two sticks on the ground. In the following TEDTalk animated presentation, Myth Buster Adam Savage recounts a few examples (starting with Richard Feynman, moving on to Eratosthenes,  Galileo, and Armand Fizeau's toothed wheel to measure the speed of light,) about how small ideas can give rise to mind-blowing ideas and revolutionary discoveries.


And if Carl Sagan is more your style, you might be interested in his take on Eratosthenes.


- Cosmos: Traveller's Tales
Humans like to travel. We are driven to discovery by an instinct of curiosity we simply can't fight. We did it in previous centuries, eventually populating every corner of the globe, and we are still doing it now, visiting and studying planets that...

- Mt. Wilson Observatory's Close Encounter
As you may or may not know, the recent seasonal fires in Los Angeles in the last few weeks came dangerously close to the famous observatory sitting atop Mt. Wilson. This is the very same facility from which, in 1929, astronomer Edwin Hubble made the revolutionary...

- Galileo's Battle For The Heavens
400 years ago today, Galileo Galilei introduced his first telescope to the world. The discoveries Galileo would make with this rather simple instrument, as well as the application of mathematical descriptions of his observations, would revolutionize our...

- "sidereus Nuncius"--published March 13th, 1610
The Stephen Hawking of the 17th Century. Title page of Galileo's Sidereus Nuncius, published in Venice in 1610. The book instantly made Galileo a European celebrity, and earned him, in July 1610, the position of chief mathematician and philosopher...

- Drawing A Perspective On The Lhc
"Hadrons and Humanity" The insights into the universe which the Large Hadron Collider will reveal have significance far beyond physics. They are a celebration of human curiosity September 8th, 2008 Timesonline Among the defining features of the human...