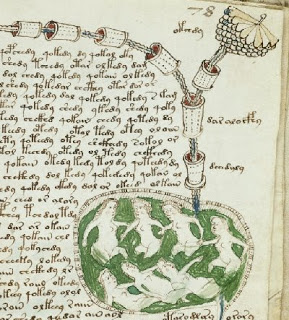 I offer this discussion of the Voynich Manuscript not for the mysterious circumstances surrounding the document but how science and a sense of history can often dismisses such things as preposterous and a product of ulterior motives--usually monetary.

The story unfolds in the villa Mondragone in Frascati not far from Rome, Italy in 1912. A rare book dealer by the name of Wilfred M. Voynich discovered the manuscript in a cache of similar documents and immediately discovered that it was from the 13th century. Some others claim the 15th and 17th centuries. The text is about 240 pages written on 7" X 10" vellum pages and in an unknown language profusely illustrated with astrological, herbal plant, and naked lady drawings--something for everyone I guess. The text has been sold and exchanged owners several times and now resides at Yale University's Beinnecke Rare Book Library since 1969.

The history of the decipherment of the text is complicated and has yielded zero results despite expert cryptographer's attempts. If it is true that it contains ancient cures and predictions it will remain with the ancients for modern cryptography has ruled that it is just a bunch of gibberish with no scientific meaning whatsoever and the crux of the document lies mostly with an historical hoax perpetuated by Johannes Marcus Marci who sold it to the gullible Emperor Rudolph II who was into all sorts of alchemical and occult things for a few Lire. Here is a case of an orchestrated hoax no doubt for obtaining "a fist full of dollars" and basically debunked by the tools of science. This one can probably be tossed in the same box as other celebrated hoaxes.


- Some Alchemy Manuscripts
"Manuscript trove illuminates the roots of chemistry" by Stephan Salisbury November 26th, 2013 philly.com It's not every day that you have the opportunity to buy a 600-year-old cookbook. It's even rarer that the ancient handwritten recipes detail...

- Voynich Manuscript Update
"Experts determine age of book 'nobody can read'" by Daniel Stolte February 10th, 2011 PhysOrg.com While enthusiasts across the world pored over the Voynich manuscript, one of the most mysterious writings ever found – penned by an unknown...

- Gregor Mendel And Pea-breeding Experiment Document
Fussing and feuding over the pea-breeding experiment manuscript. "A Family Feud Over Mendel’s Manuscript on the Laws of Heredity" by Nicholas Wade May 31st, 2010 The New York Times A long lost manuscript, one of the most important in the history...