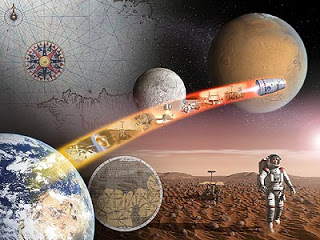 An old friend of years passed visited the other day. We talked politics and jabbed a punch at mutual fools; chuckled at previous hardships; mourned current ills and hardships. Saddened we were in seeing the shrinkage of the powers of the middle class; increase of poverty and philosophical indenture; injustice; inequality of distribution of goods and services. Try as we might there is homelessness, suffering, poverty. We eventually return to the realm of the sciences where my powers of persuasion failed to penetrate his resolute stance on the non-value of space exploration. He doesn't share the wonder of the universe as I see it--his feet are firmly rooted in the multitude of issues festering in this metropolis specifically and the world in general. Why spend billions on Mars? Why have an organization as NASA? I find this stance stifling and not truly representative of the rich history of mankind when it comes to branching out regardless of the woes of civilization. Consider the world of the 16th Century. Do names like Magellan, Columbus, Balboa, Copernicus, Tycho Brahe, Galileo, Kepler, Paracelsus jog the memory of exploration and expanse of knowledge? Given time, I would have read to him a passage from Edmund Spenser’s Faerie Queen:

But let that man with better sence advize,
That of the world least part to us is red:
And dayly how through hardy enterprize,
Many great Regions are discovered,
Which to late age were never mentioned.
Who ever heard of th'Indian Peru?
Or who in venturous vessell measured
The Amazon huge river now found trew?
Or fruitfullest Virginia who did ever vew?
Yet all these were, when no man did them know;
Yet have from wisest ages hidden beene:
And later times things more unknowne shall show.
Why then should witlesse man so much misweene
That nothing is, but that which he hath seene?
What if within the Moones faire shining spheare?
What if in every other starre unseene
Of other worldes he happily should heare?
He wonder would much more: yet such to some appeare.
Why we do what we do and need to do is difficult to explain, but it is, nevertheless, a significant feature of mankind.

For the present time, considering hazards and money, it may well be wise to crunch a few numbers. A typical shuttle mission, for example, runs between $400 million and $500 million. A satellite can reach orbit for $20 million. Unmanned landers have touched down on Mars for as little as $250 million. But the estimated price tag for a manned journey to the red planet runs anywhere from $50 billion to $500 billion. Prudence may rule here for a while.

"Who should explore space, man or machine?"

The call for an "ethical" approach is heard by very few and most often overshadowed by power and cupidity. I am afraid mankind's history is littered with such efforts. The rape of the land and resources and subjugation [if not elimination] of the citizens is all too common. But science exploration [on Earth and in space] is a bit different at least in the infancy of recent activities and will certainly be compounded many centuries down the road when we has become more sophisticated in space exploration and potentially discover alien nations. Will we do what was done by Cortes and his band of conquerors?

Decisions made by committee?

"We find that profound scientific questions relating to the history of the solar system and the existence of life beyond Earth can best - perhaps only - be achieved by human exploration on the Moon or Mars, supported by appropriate automated systems."
So says the Royal Astronomical Society [RAS] urging the British Government to reconsider its position regarding man in space.

Jim Lehrer [PBS Newshour host] had a conversation with Roger Launius [chairman of NASA's space history division of the Air and Space Museum], Neil Degrasse Tyson [astrophysicist and the director of the Hayden Planetarium at the American museum of natural history in New York], Octavia Butler [Sci-fi writer], and Timothy Ferris [Sci-fi writer and professor at the University of California Berkeley] on PBS's News Hour, February 4th, 2003 entitled

"Reaching for the Stars"

Steven J. Dick [NASA's Chief Historian] has offered an essay on this subject in light of the current administration's push to revitalize space exploration and opened a can of worms on conceptual definitions of the meanings and philosophical/historical import of "Exploration, Discovery, and Science" .

And, "Proceedings from the NASA Administrator's Symposium: "Risk and Exploration: Earth, Sea and the Stars"" .

How interesting...a "Washington Post" article "NASA's Griffin: 'Humans Will Colonize the Solar System'" [a question and answer session with "Washington Post" staff and NASA's CEO Michael D. Griffin]. Well, a lot of "pie in the sky" and the balloon was burst by a sharp sense of reality. In principle, the philosophy of exploration in space is sound and expresses mankind's desire to explore the unknown. But, as usual, reality appears and perspectives change--as it should be.

Not really. "Sexxxxxxxxxx innnnnnnnnn spaceeeeeeeeee". Well, it was bound to surface--"romance/sex" in space. The relationships initiated in space or on other planets are just as complicated there as they are here and there are no rules. It is basically a manifestation of a desire to be wanted and a sharing of experiences. Maybe it is something innate to pair and propagate the species. But just remember the complications: The dating part, the sex part, the rivalry, the rejection. What if the situation happened with aliens? The whole mission could suffer. This may just be another good reason to curb space travel for a while.

However, I suspect economics will be right there, as it has been in the past, as demonstrated in a pep talk from Ron Sugar [Chairman, CEO, and President of the Northrop Grumman Corporation]?

Yes, "economics"...it may be a motivation from private enterprises but it does cost a lost to get from "here to there". The Presidential mandate to head for Mars is just totally unrealistic for many reasons including the money which is just not there with current world conditions. For example:

"What does the Cassini-Huygens mission cost?

"The total cost of the Cassini-Huygens mission is about $3.26 billion, including $1.4 billion for pre-launch development, $704 million for mission operations, $54 million for tracking and $422 million for the launch vehicle. The U.S. contributed $ 2.6 billion, the European Space Agency $500 million and the Italian Space Agency $160 million."
--NASA.
NASA and the administration's desire to place man on Mars is under deserved critical scrutiny. "Bread and circuses" for the populace at the expense of "billions and billions" of dollars. Would it be wiser to continue space projects of modest expense and greater value and safety and still address the huge issues on Earth. We can travel later. Here are some selected links discussing the administration's program and NASA as well as the costs involved. Consider the factoring of inflation and unknown global issues of the future.

"Back to Moon via 'Apollo on Steroids'"

"Price tag, purpose of space exploration up in the air/Cost of Mars, moon trips depends on the technology used"

"The reaction to the exploration plan"

"A Trillion Here, a Trillion There . . ./Going to Mars isn't nearly as expensive as you've heard"


- The "experts" Need A Reality Check
"Dream of Mars exploration achievable, experts say" May 5th, 2013 MARSDAILY NASA and private sector experts now agree that a man or woman could be sent on a mission to Mars over the next 20 years, despite huge challenges. The biggest names in space exploration,...

- Obama's Smart Move
This is a smart move by the Obama administration. It is time that many of NASA's projects be curtailed or placed in outside competent contractors and a realization in these economic times that trips to the moon and Mars are unreasonable and fraught...