﻿ To the moon and beyond
Philosophy

To the moon and beyond 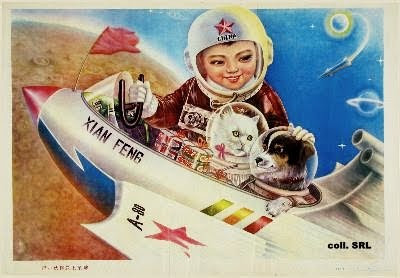 "Men will return to the moon, but they will likely speak Chinese."
This is a well-crafted article promoting political and cultural hype. It fosters the assumption that bias and non-cooperation would be the rule. Besides, where is it written that only English must be uttered in space. Space exploration will and must be mutually shared by all nations that participate. It is time for NASA to wake up and realize that their reign is over and they must be part of a scientific contingent.

Investor's Business Daily
Achievement: The nation that put the first man on the moon may have put its last as budget cuts slash NASA's plans to return. Men will return to the moon, but they will likely speak Chinese.

On May 25, 1961, President Kennedy announced in front of a joint session of Congress the dramatic and ambitious goal of sending an American to the moon by the end of that decade. It was a clarion call to the American spirit and technology to rise up and prove that America's best days were still ahead.

Forty-one years after Neil Armstrong set foot on the moon in 1969, rather than continuing on to Mars and beyond, we will soon be hitching rides on Russian spacecraft to fix toilets and conduct science-fair-level experiments on the International Space Station. Our aging space shuttle fleet is about to be retired, and no money is around to replace it.

According to a report in the Orlando Sentinel, when the White House releases its official budget proposal on Monday, there will be no money for the Constellation program that was supposed to return Americans to the moon by 2020. The American-manned space program that galvanized a nation and made manned space flight a reality will be officially dead.

An administration that complains about the outsourcing of jobs and manufacturing capacity to foreign countries has decided to outsource manned space flight. NASA will buy rides for its astronauts, no longer pioneers but rather space tourists, from the Russians at $51 million a seat on their Soyuz space vehicles. Last May, NASA announced a new contract with the Russians allowing it to buy six seats on Soyuz craft in 2012 and 2013 at a cost of $306 million.

The massive Saturn V that sent American astronauts and their Apollo spacecraft to the lunar landscape is now a museum piece, as will be the space shuttle. NASA needs about $3 billion in additional funding each year for the next five years to keep the space station supplied and to create a new generation of spacecraft. It will not be getting it.

The loss of this funding and the retirement of the space shuttle will have "a huge negative impact on the economy, particularly aerospace," according to Bret Silcox, associate director of the National Space Society, a leading advocacy group. Silcox says Florida, where three shuttles will be retired, will lose 2,000 to 7,000 jobs. Apparently no stimulus money will be spent to save them.

The White House wants NASA to redirect its mission to concentrate on Earth-science projects such as monitoring climate change from orbiting satellites and the International Space Station. Some funding for private companies such as Virgin Galactic will go to developing space taxis to carry people into near-earth orbit. But you can forget going back to the moon or Mars.

Those missions, apparently, will be left to the Chinese. In 2008, NASA scientists told the Bush White House that, with the technology available to the Chinese space program, that country's astronauts could be on the moon by 2017.

The Chinese plan to use four Long March V rockets, roughly equivalent to the Pentagon's Delta IV heavy-lift vehicles, to each lift 26-ton payloads, including a trans-lunar rocket, lunar module and lander, into earth orbit. From there, the Chinese will go to the moon.

During his visit to Beijing last November, President Obama talked about "cooperation" rather than competition in space. In a joint statement with Chinese President Hu Jintao, the two leaders called for "a dialogue on human space flight and space exploration."

John F. Kennedy once pledged: "We choose to go to the moon."

Now we are hoping the Chinese can give us a lift.

Thanks to POSP stringer Tim.


- Nasa's Future
Maybe it is time to be realistic and turn NASA over to private enterprise. "House, Senate have different ideas for NASA's future" Commercial funding axed; no extra shuttle launch in plan by Bart Jansen July 21st, 2010 FLORIDATODAY.COM A House committee...

- First An Asteroid...then Mars--crazy
This is not a good idea...period. "Obama Aims to Send Astronauts to an Asteroid, Then to Mars" by Tariq Malik April 15th, 2010 SPACE.com President Barack Obama unveiled a sweeping new space vision for NASA and the United States Thursday, one that...

- Obama's Smart Move
This is a smart move by the Obama administration. It is time that many of NASA's projects be curtailed or placed in outside competent contractors and a realization in these economic times that trips to the moon and Mars are unreasonable and fraught...

- Private Enterprise And Space
This is an excellent idea that could free up NASA to invest more in non-man programs and simply act as a custodian of private enterprise activities. "Let private firms run space taxis, panel told" by Irene Klotz July 30th, 2009 Reuters The U.S. government...