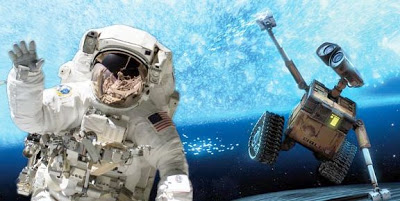 "Humans vs. Robots: Who Should Dominate Space Exploration?"

Wired
The most recent footprints on the moon are 40 years old, and the next artificial mark on the lunar surface will probably be made by a robot’s wheels rather than human soles.

Many space scientists, engineers and politicians argue that this is a good thing. Most astronomers will tell you that virtually anything a human can do on another planet, a robot can do, only cheaper and without the risk of losing a life. But the battle between humans and robots for the starring role in the next chapter of space exploration is not yet settled.

“In what was really only a few days on the lunar surface, the Apollo astronauts produced a tremendous scientific legacy,” said planetary scientist Ian Crawford of Birkbeck College in London, author of a paper in the April issue of Astronomy and Geophysics. “Robotic exploration of the moon and Mars pales in comparison.”

Robots have done all the recent planetary exploration in the solar system. In past decades, rovers, landers, and orbiters have visited the moon, asteroids and comets, every planet in the solar system and many of their moons as well. But how does their work compare to that of human astronauts?

In terms of sheer scientific output, manned exploration of outer space has a good track record. More than 2,000 papers have been published over the last four decades using data collected during the manned Apollo missions, and the rate of new papers is still rising. In comparison, the Soviet robotic Luna explorers and NASA’s Mars Exploration rover program — Mars Pathfinder, Spirit, and Opportunity — have each generated around 400 publications.

Humans hold a number of advantages over robots. They can make quick decisions in response to changing conditions or new discoveries, rather than waiting for time-delayed instructions from Earth. They are more mobile than current robot explorers: The Apollo 17 astronauts covered more than 22 miles in three days, a distance that has taken the Mars Opportunity rover eight years to match. Humans can drill for samples deep underground and deploy large-scale geologic instruments, something that no rover has achieved on another body.

Despite these qualities, many experts are skeptical of Crawford’s argument.

“I strongly disagree with his conclusions,” wrote engineer Adrian Stoica, who supervises the Advanced Robotic Controls group at NASA’s Jet Propulsion Laboratory, in an email to Wired. He notes that Crawford’s paper seems to focus on cost in terms of scientific output achieved.

The Apollo program was incredibly expensive — about $175 billion in today’s money — though it was not solely a scientific mission. It was mainly a geopolitical stunt during the Cold War to show American technological superiority over Russia, with science piggybacking on the ride.

The total amount spent on science over the Apollo missions, Crawford estimates, comes to about $2.09 billion in today’s dollars, making it comparable to or even cheaper than the recent $2.5 billion Mars Science Laboratory.

But contrasting manned lunar missions with robotic Mars missions is not the right way to go, wrote Stoica. A better analysis would use the potential cost of a manned Mars mission, which NASA estimates to be at least hundreds of billions of dollars.

Crawford counters that cost is not the biggest impetus behind his analysis. Instead, he wanted to bring attention to the sheer efficiency and legacy that the Apollo program achieved during its short time. If space exploration continues to focus on sending robots to other planets, “we will learn less about the solar system in the next 100 years than we will if we engage in an ambitious program of human exploration,” he said.

Of course, humans and robots each have their own advantages for exploration of outer space.

“There isn’t a battle between robots and humans — that’s comparing apples and oranges,” said James Garvin, chief scientist at NASA’s Goddard Space Flight Center. “We send the robots as our pathfinders and scouts, and they open the frontiers so that we can decide where and when to send the people.”

Humans and robots already work together on Earth and in space. There are schemes that offer the advantages of human exploration without incurring as high of a cost.

“What makes robots at a distance inferior to humans is one thing only: latency,” said astronomer Dan Lester of the University of Texas at Austin.

The time it takes for a signal to travel from a robot back to mission control on Earth is a major stumbling block. Commands sent to a Mars rover take between 5 and 15 minutes. Light travel time to the moon is around 2.6 seconds.

“It takes 10 minutes to tie a knot with the Earth-moon latency,” said Lester. “But if we could bring that down to about 100 milliseconds, the robots themselves are very capable.” Teleoperated robots on the surface of another planet would have greater strength, endurance, and precision than human explorers, he added.

Teleoperation has been considered in the past for space exploration. During the Apollo era, the technology was not well developed but in the last decade, it has taken off. On Earth, surgeons in Baltimore now perform operations in Indonesia while officers in Nevada covertly spy on nuclear sites in Iran.

Lester envisions a future where astronauts camp out on Mars’ moons Phobos and Deimos and order remote-controlled robots to drive long distances over the planet’s surface, set up geologic instruments, and collect samples for analysis. He estimates this could greatly reduce costs because roughly half the price tag of a manned mission is spent on getting people down and back up the deep gravity well of a planet.

Crawford agrees such a plan would be a step beyond simply sending a robot, though perhaps less efficient than putting people on a planet’s surface.

“I think it will be strange to spend all the money to go all that way and then not land,” he said.


- Is Manned Spaceflight Obsolete?
With new proposals for NASA on the table, it seems a good time to ask whether a manned flight to Mars -- the centerpiece of the Bush space priorities -- makes any sense and more generally whether sending people instead of robots into space makes sense....

- The "experts" Need A Reality Check
"Dream of Mars exploration achievable, experts say" May 5th, 2013 MARSDAILY NASA and private sector experts now agree that a man or woman could be sent on a mission to Mars over the next 20 years, despite huge challenges. The biggest names in space exploration,...

- A Lunar Satellite?
This is ridiculous. Would the asteroid have any effect on Earth's tides? "NASA mulls plan to drag asteroid into moon's orbit" by Jeff Hecht January 2nd, 2013 New Scientist Who says NASA has lost interest in the moon? Along with rumours of...

- Who [or What] Are The True Explorers?
I'm not too sure that this is a real question. What difference does it make? And, doesn't it all hinge on definition? And down the road will the question be asked again when artificial intelligence is common place? "Should NASA's Mars Rover...