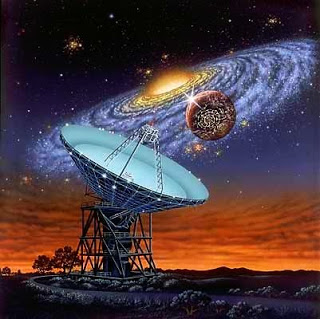 I am glad that it isn't sponsored by a government institution and that it remains in the realm of private enterprise. SETI --an appendage of modern mythology? Certainly mankind would like to know if we are alone in the universe--something truly unique. And we would like to have a glimpse into the fate of our species. We would like to know the purpose of the universe and mankind's role...a plan or just a freak occurrence.

Here is some background material of NASA's involvement with the SETI program before funding from congress curtailed the relationship.

"Searching For Good Science: The Cancellation Of NASA's Seti Program"

"The Search for Extraterrestrial Intelligence: Seti"

"PROJECT ORION: A Design Study of a System for Detecting Extrasolar Planets"

"LIFE IN THE UNIVERSE"

SETI commands a huge public interest--over two million hits a month at their web site. Popularity waxes and wanes. Nothing has been discovered regarding alien intelligence. It is estimated that only one billionth of the universe has been investigated. It is interesting to note that time is slipping away for the universe is expanding rapidly and thus decreasing our odds of communication. Also consider that even if we discern some significant radio signal, say something from a star system 50 light years away, the signal is 50 years old. Imagine setting up meaningful dialogue that require 100 years for two messages:

Tedious and nearly worthless other than knowing someone else was out there 50 years past. And all of that based on the ability to even decipher the radio signal. But even knowledge of the presence of another intelligent life form would certainly alter much of mankind's philosophy.

Even Freeman Dyson has chimed in on SETI. He has offered a wager: "The first discovery of extraterrestrial life will be someplace other than on a planet or on a satellite of a planet"--that contact with other beings will most likely be via probes instead of our usual perception of alien contact. He may be correct. Consider Voyager1's plunge into deep space. The only drawback is that data [conversation of you like] will be so outdated that the species involved may have expired.

"I think it is worthwhile even if it only confirms life out there, it would be profound. As you say, the possibility of two-way communication seems remote with few exceptions. Our first contact is likely to be someone's earlier radio broadcasts. Such as " The Wilslix Knows" or "The Lone Ramspok" and maybe later things like "Route ## " or" Days of Our Wifeers" on television broadcasts. Of course our earlier radio broadcasts have been going out at the speed of light for over eighty years now. Still any kind of reply could take quite some time. I hate to think what they might think of our survival shows when the television broadcasts hit them! Also even if they are more advanced they might learn a few things from us as well."

"Also even if they are more advanced they might learn a few things from us as well."...like stay away! It would be so arrogant for mankind to believe and perpetuate a philosophy of species solipsism. Oh deity!...species analysis based on the bulk of radio and television signals would be mankind's kiss of loneliness. And then again, there may be others like us or those that would find pleasure in emulating us--ARGH!

Kelic: "Hey Gort, check this out...some male of the species is eating grubs in a pit of vipers."

Robert Roy Britt of Space.com wrote an article the idea of "intergalactic messages" is mentioned. Essentially there are two methods in view: The current method of electromagnetic signals and, as the article states, the "message in a bottle" approach. Each method has failing features. The former to be successful would require way too much energy for signal propagation and may miss a potential recipient. The latter is slow and cumbersome since there is no way now known to propel such a "bottle" near speeds of light to have a successful means of communication.

"Researchers: ET Should Write, Not Call"

What about broadcasting the Internet?

The "Good, the Bad, the Ugly"? Scanning the universe [or at least a very small section of it] for signals of extraterrestrial signals is one thing, but a continual broadcast of Earth originated data is another, especially when it is proposed that the "world wide web" be transmitted. Is the "www" what we want aliens to witness of Earth's citizens? The web is filled with hate, violence, racism, pornography, bias, crackpots, bad reasoning and bad science. A lot is not in a single language which could be difficult for translation and understanding. Web formats of textual data and images could be inaccessible. Where will all the passwords come from? Could "Gortreon" from a distant galaxy use his Mastercard for subscriptions? I suppose "Gortreon" and his colleagues could hack the sites. Granted, the "www" does exemplify the "Good, the Bad, the Ugly" of mankind, but do we really want to display the whole package of the human race to potential friends in the universe without and explanation and defense? Wouldn't it be better to pick and choose the information prior to submission and put our best foot foreword?

"What Do You Say to An Extraterrestrial?"

Well, this is interesting: A reversal of the modus operandi of the goals of SETI. Instead of, or in addition to, "waiting" for a signal from extraterrestrial intelligence--send an "invitation" via the Internet. This novel approach ["Invitation to ETI"] is the idea of Allen Tough Professor Emeritus at the University of Toronto, Canada. Dr. Tough has some unusual and optimistic ideas concerning extraterrestrial intelligence and man's position in the universe.

"Welcome to the home page for the Invitation to ETI"

Well, this could be a problem: Missed or misinterpreted potential alien messages. Compare the shortness in time of our listening apparatus and methodology to an alien civilization far advanced in sending messages through out the universe with peers.

"Would We Mistake Signals from ET?"

Maybe it "is" about time to re-evaluate the functions of SETI.

"Motivated by recent developments impacting our view of Fermi’s paradox (absence of extraterrestrials and their manifestations from our past light cone), we suggest a reassessment of the problem itself, as well as of strategies employed by SETI projects so far. The need for such reevaluation is fueled not only by the failure of searches thus far, but also by great advances recently made in astrophysics, astrobiology, computer science and future studies, which have remained largely ignored in SETI practice. As an example of the new approach, we consider the effects of the observed metallicity and temperature gradients in the Milky Way on the spatial distribution of hypothetical advanced extraterrestrial intelligent communities. While, obviously, properties of such communities and their sociological and technological preferences are entirely unknown, we assume that (1) they operate in agreement with the known laws of physics, and (2) that at some point they typically become motivated by a meta-principle embodying the central role of information-processing; a prototype of the latter is the recently suggested Intelligence Principle of Steven J. Dick. There are specific conclusions of practical interest to astrobiological and SETI endeavors to be drawn from coupling of these reasonable assumptions with the astrophysical and astrochemical structure of the spiral disk of our Galaxy. In particular, we suggest that the outer regions of the Galactic disk are most likely locations for advanced SETI targets, and that sophisticated intelligent communities will tend to migrate outward through the Galaxy as their capacities of information processing increase, for both thermodynamical and astrochemical reasons. However, the outward movement is limited by the decrease in matter density in the outer Milky Way. This can also be regarded as a possible generalization of the Galactic Habitable Zone, concept currently much investigated in astrobiology."

"Galactic Gradients, Postbiological Evolution and the Apparent Failure of SETI"

Below is an excellent overview of the SETI program.

Now this raises a troublesome issue...the real possibility of never establishing contact with anyone else in the universe.

KING: When, Professor, did the universe begin, and do you know when it'll end?

HAWKING: We have good evidence the universe began in a big bang, about 15 billion years ago. We are less certain how it will end, but recent observations suggest a universe will expand forever at an ever- increasing rate.

Respect for a brilliant scientist, yes, ...certainly Hawking doesn't hold the key to open the door to reveal the fate of the universe. But, one part of his answer is quite fascinating and equally baffling: "...recent observations suggest a universe will expand forever at an ever- increasing rate." The words "forever" and "ever-increasing rate" are words of merit, weight, insight, mystery, and doom. The current model of the "Big Bang" provided the initial outward force to propel the universe into existence, but yet there is "something" that is supplying energy to increase its speed. Counter force of gravity--hypothetical "dark energy"? Einstein's fudge factor--"cosmological constant"? The universe isn't static. The Chandra x-ray telescope checking on galaxy clusters some one to eight billion light years distant has illustrated the fact that the universe is expanding and rapidly. Maybe there is no "dark energy"--an unknown feature of gravity. Perhaps the expansion, unlike Hawking's stance, will slow down and reverse. The "Big Crunch"? The "doom" part is also fascinating for it can define man's relationship to the universe as being a truly unique species [by chance or design] in that the universe will expand and thus increase distance and communication with other potential species and space travel. On the other hand, if the "Big Crunch" is a viable model, then there may be a window of opportunity for communication and travel. Longevity and maturity of our species will be a paramount issue. The "Big Crunch" is certainly a better deal than an ever expanding universe resulting in human isolation and loneliness.

No contact with alien intelligence coupled with not a trace of a species existence--JEEZE. That is sadness. "Humility" may be the key word there. The ancient Greeks had a word for that: "Tyche"..."knowing ones place on the scheme of things" with humbleness and reserve. Maybe that is the only certainty we may ever know?

I seriously doubt that many citizens of the world contemplate the focus of this topic. Is this citizen pusillanimous in addressing this issue? No...they are more interested in survival, feeding themselves and family, coping with illness [short term and terminal], avoiding pain [mental and physical], paying bills, dodging the rebel's bullet, etc. [Of course there is overlapping.] It appears that it is the poets, philosophers, and scientists that are keenly interested in the role of mankind with the universe and the potential fears of species loneliness. Not an egregious situation for those are the ones that institute new thought and doctrines of belief. But that may not be all that detrimental. Striking a conflict between the positive and negative metaphorically producing fire and consummation, there will arise the legendary Phoenix. Humm--Hegel still lives. On the final analysis, for an individual, those "worry and despair" issues evaporate in but a few decades. Let the next one in line carry the torch of mankind's fate.


- We're Not Home, E.t. Please Leave A Message...
Are we alone in the universe? I have no clue. My guess is that we probably aren't, but the odds of ever finding other forms of intelligent life are so small that one may wonder why we have SETI in the first place. This is one of those strange cases...

- "little Green Men" In The Crosshairs Again
"Dreamland Design" by Jilaen Sherwood That's fine...they can chase "little green men" all they want--as long as it doesn't rely on government funding. It appears that money and research could be better directed. "SETI Astronomer Envisions Technology...