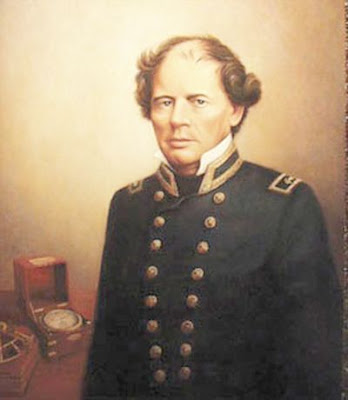 Nicknamed "Pathfinder of the Seas," Matthew Fontaine Maury made important contributions to charting wind and ocean currents. His studies proved that by following the winds and currents ships could cross the ocean in fewer days than ever before.

In 1825 at age 19, Maury joined the United States Navy as a midshipman on board the frigate Brandywine. Almost immediately he began to study the seas and record methods of navigation. When a leg injury left him unfit for sea duty, Maury devoted his time to the study of navigation, meteorology, winds, and currents. His hard work on and love of plotting the oceans paid off when he became Superintendent of the Naval Observatory and head of the Depot of Charts and Instruments. Here Maury studied thousands of ships' logs and charts. He published the Wind and Current Chart of the North Atlantic, which showed sailors how to use the ocean's currents and winds to their advantage and drastically reduced the length of ocean voyages. Maury's uniform system of recording oceanographic data was adopted by navies and merchant marines around the world and was used to develop charts for all the major trade routes.

With the outbreak of the Civil War, Maury, a Virginian, resigned his commission as a U.S. Navy commander and joined the Confederacy. He spent the war in the South, as well as abroad in England, acquiring ships for the Confederacy. Following the war, Maury accepted a teaching position at the Virginia Military Institute in Lexington. He died at his home in Lexington in 1873 after completing an exhausting national lecture tour.

"Victorian-era citizen science: reports of its death have been greatly exaggerated"
by
Caren Cooper
August 30th, 2012
Scientific American
In my last blog post, I introduced Matthew Maury, an American naval officer who began a citizen science project in the mid-1800s that transformed seafaring and drew society closer to science. Now let’s meet his British counterpart, William Whewell, an elite scholar who engaged the public to understand the tides, but in so doing helped to solidify the distinction between amateur and professional scientists.

Whewell pursued an exemplary career at Trinity College, Cambridge. Whewell began as a student at Trinity College in 1812, served in two professorships, first mineralogy and then philosophy, and finally rose to the top as Master at Trinity College from 1841 until his death in 1866. Although Whewell’s colleagues embraced the emerging trend of specializing in particular disciplines, Whewell remained a polymath with expertise in many subjects, including geology, astronomy, economics, theology, law, and the philosophy of science.

Where Maury mapped the oceans, Whewell mapped the coasts, where unpredictable tidal cycles caused shipwrecks and made coastal navigation dangerous. Tides are puzzling: as late as 1953, an “unexpected” high tide on the Thames drowned 300 people. Great thinkers have investigated the mystery of tides throughout history, and the influence of the moon was suspected as far back as Galileo. Advances in tide research were not stymied by a lack of great and curious minds, but by a lack of data – and Whewell figured out how to get it. Whewell took a citizen science approach to tidal research with a project known as the “great tide experiment.”

With the consent of the British Admiralty, Whewell coordinated thousands of people in nine nations and colonies on both sides of the Atlantic in the synchronized measurement of tides. At over 650 tidal stations, volunteers followed Whewell’s instructions for measuring tides every 15 minutes, around the clock, during the same two week period in June 1835. Volunteers in the “great tide experiment” included dockyard officials, sailors, harbormasters, local tide table markers, coastal surveyors, professional military men, and amateur observers. Many participants did more than measure the tides; they also tabulated, graphed, and charted the data. Whewell brought it all together into maps illustrating how the tides progressed across the Atlantic Ocean and onto shores, inlets, ports, and into rivers and estuaries. In 1837, the oldest learned society of science, the Royal Society, awarded Whewell a Royal Medal for his work on tides. The Royal Medal is one of their highest honors, and one they later bestowed on Charles Darwin.

Whewell was very different from the navy-man Maury in two important ways: writing style and academic tradition. First, Maury’s writing appealed to popular audiences; Whewell’s appealed to academics. Maury’s style was accessible, sometimes poetic , and sometimes he wrote humorous and candid political critiques using the pen name Harry Bluff. Whewell, on the other hand, fathered scientific jargon. He coined many terms, including one for his own niche in physical astronomy, tidology (it never caught on). Whewell was the go-to person when other scholars needed to describe a new concept or discovery, inventing words like ion, anode, and cathode. As early as 1833, Whewell coined the term scientist: before it caught on, such an individual was called “man of science” or “natural philosopher” and they were more likely pursuing science in their leisure, not as a profession.

The second important difference was academic tradition. Both men carried out research by quite similar citizen science methods in the mid-1800s, but they were part of very different intellectual traditions. As a professor at a college founded in 1546, Whewell was part of an academic hierarchy established long ago. Maury was a military man who later taught physics at an institution (Virginia Military Institute) barely more than a decade old. Whewell was in the prestigious Royal Society, mentioned above, which was founded in 1660; Maury was a key figure presenting at the founding meeting, in 1848, of the US counterpart, the American Academy for the Advancement of Science, or AAAS.

These two differences between Maury and Whewell translate into their differing views of the relationship between science and society. Both men produced results of practical and theoretical importance, but Maury popularized science and engaged the common person in applied research, whereas Whewell involved people in supporting the work of the professional elite. In two highly regarded books on the philosophy of science, Whewell defined the social and intellectual roles of scientists. Whewell emphasized that a scientist did not only make and assemble observations, but also synthesized concepts and developed theories to explain the patterns of observations. In erudite arguments with John Stuart Mill about inductive reasoning, Whewell viewed observations as pearls, and induction as the rational mental processes by which minds can string the pears together to form a necklace. In the context of Whewell’s citizen science project, thousands gathered the pearls (he referred to the thousands of collaborators as his “subordinate labourers”), and he, the scientist, assembled the necklace. His choice of the words “subordinate labourers” illustrates the class systems which structured his thinking.

Whewell’s books established a social hierarchy to science, distinguishing the hobbyist or part-time devotee from the professionals and specialists. He placed elite theorists on the top of the hierarchy. Below were those paid to help construct tide tables and make sophisticated mathematical calculations. His “subordinate labourers” were not part of the hierarchy of professional science. Today, many think of public participation in science as a way to democratize science, or at least better integrate science into society. At first it may seem ironic that Whewell – one of the first to engage a broad swath of the public in a formal, highly structured research project – led the charge to professionalize science and separate the scientist from society.

Yet, sometimes we can only define something by its antithesis. As Mark Twain pondered, “What is joy without sorrow? What is success without failure? What is a win without a loss? What is health without illness? You have to experience each if you are to appreciate the other.” Before “scientist” became a clearly defined career, discovery was commonly a collective effort by those with leisure time. Early collaborations between science and society often took the form of well-to-do natural history collectors donating specimens to museums. I view the great contributions of volunteers among the upper-crust as more representative of how science, not citizen science, was accomplished at that time. By distinguishing the profession from the leisure, Whewell defined both. Now we can’t have citizen science – defined as the public engaged in professional research – without professional research.

The continental-scale citizen science projects carried about by Maury and Whewell are a nice reminder of what was possible before our age of the Internet and mobile communications. Maury and Whewell were able to compile enormous amounts of data they received in handwritten logs carried in burlap sacks on sailing ships and notes delivered by stagecoaches. They didn’t have GPS, but they created useful maps. Nowadays it is hard to plan a simple lunch date without using a phone or email, but people used to communicate, coordinate, and plan complex events without the help of these technologies. Even before Maury and Whewell, the synchronized, worldwide observations of the 1779 transit of Venus allowed the calculation of the distance to the Sun and the size of the solar system. Fact is that the lack of speedy communication technologies did not prevent global collaboration, crowdsourcing of data, or the coordination of large-scale data collection by volunteers.

Discovery has always been possible through collaborations among curious people working in other careers across all segments of society. The most important way that advances in science and technology have fostered citizen science often goes unnoticed: thanks to science we have more leisure time than people in the 1800s. Society and scientists are reviving a fashion from a time when scientific endeavors were highly integrated into society; a time when hobbies were damn serious, meaningful, and sophisticated commitments. I think we in the citizen science field are stylish hipsters carrying out science the original way: the way that leads to big discovery and big societal change. Speed is not essential, but it is a beautiful fashion accessory: it brings unique prospects (many of which I will cover in future blog posts). We are not the first generation to understand that to answer the big questions, you have to coordinate big networks of people around the globe. Will the current technology-driven explosion of this retro science fashion bring back that time when discovery was fair game for anybody?

[Caren Cooper, PhD, is a Research Associate at the Cornell Lab of Ornithology. She studies bird behavior, reproduction, and ecology at large scales using data from citizen science networks. In addition, Cooper works with social scientists to study why people get involved in citizen science and nature-based recreation. She has analyzed how citizen-science methods have been used to aid urban planning, e-governance, and policy initiatives. She is writing a nonfiction book about citizen science and is a Senior Fellow in the Environmental Leadership Program.]


- Why Do You Know That?
Let's do this one again. It's the converse of "Auto Mechanics to Quantum Mechanics" where you provide everyone with those tidbits of useless knowledge you have stored away for no good reason. My contribution: New Haven, CT has the greatest number...

- What Science Should We Fund?
A recently released study shows no evidence that people who are prayed for do better after heart surgery than those who received placebo prayers. The long-standing myth of the efficacy of prayer as therapy was tested and the evidence clearly stands against...

- Laura Snyder - The Philosophical Breakfast Club
When we think about scientists, and especially the birth of science, our minds usually go straight to Galileo, Descartes, Kepler and Newton, and then to folks like Michael Faraday, Joseph Priestly, Antoine Lavoisier, Lord Kelvin, Darwin, etc. Or maybe...

- History Of Science Society And James Orchard Halliwell...a Scandal
James Halliwell-Phillipps "The first HSS: the sad fate of a 19th-century history of science society" How an 18-year-old Royal Society fellow's fascination for manuscripts sunk an early venture in the history of science by Rebekah Higgitt    ...

- Centralization Of Science...a Good Thing?
The centralization of science can yield results but as the author suggests...it may well overlook the value of the amateur scientist. "A New Kind of Big Science" by Aaron E. Hirsh January 13th, 2009 The New York Times Next summer, the Large Hadron...