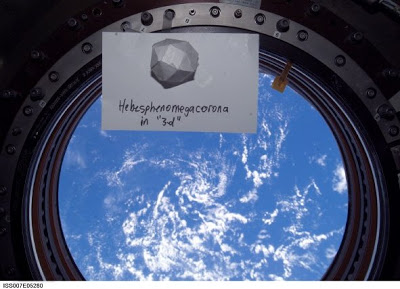 
Said NASA when this photograph was released...

Four hundred years ago the makeup of our solar system was a matter of intense debate. Was Earth at the center of everything? Or the Sun? Astronomers knew of six planets including our own. Why six? And what determined their spacing? No one knew.

In 1595, Johannes Kepler had a beautiful idea. He was fascinated by the five "perfect solids," also known as Platonic solids: the tetrahedron, the cube, the octahedron, the dodecahedron and the icosahedron (pictured right). Each is made of only one kind of regular polygon--a triangle, a square or a pentagon--hence their "perfection." Kepler realized that these five solids nestled one inside another defined the supporting structures for six circular orbits. Planetary orbits! "The intense pleasure I have received from this discovery can never be told in words," wrote Kepler.

Too bad it was wrong. Planetary orbits are not circular--a fact later discovered by Kepler himself. Now we know there are nine planets, not six, and the Platonic solids have nothing to do with the architecture of our solar system.

Nevertheless, 3D solids made of squares and triangles and pentagons continue to fascinate scientists and explorers. Witness today's picture: a hebesphenomegacorona onboard the International Space Station.

This solid has 21 faces, three squares and 18 triangles. It is one of the three-dimensional shapes called "Johnson solids" you can make by mixing different kinds of regular polygons. In 1969, mathematician Viktor Zalgaller proved there were only 92 Johnson solids, and he gave each one a fanciful name: e.g., square dipyramid, pentagonal orthocupolarontunda, gyrobifastigium, snub disphenoid, and hebesphenomegacorona. (A fun word game: try to use one of these names in everyday conversation.)

What's a hebesphenomegacorona doing onboard the ISS? We're not sure. It was made by Ed Lu or Yuri Malenchenko using paper and tape. One of them fixed it to the top of the Destiny Lab window and took its picture with the cloudy Pacific Ocean in the background.

Were they testing Zalgaller's proof in microgravity? Passing the time on a Saturday morning? Building models of weird solar systems? Maybe they were just playing word games.


- Smart Puns
Posts have been a bit long this week, so thought we'd do something shorter. Yesterday was a good pun day and I figured that would be a fine excuse for a post. The first is from my first year seminar and the second from a response to a paper I'm...

- Sayonara Planet Pluto
Tova Hagler, 10, left, reads through the names of the planets with her brother, Yaakov, 5, as they walk through the Scales of the Universe exhibit at the Rose Center for Earth and Space at the American Museum of Natural History in New York. Pluto was...

- Nicholas Of Kues..."ahead Of His Time In The Field Of Science"
Nicholas of Kues 1401 to August 11th, 1464 Cardinal Nicholas of Cusa was a "German theologian, influential philosopher, mathematician, and scientist. His scientific ideas, shrouded in theological language, were his personal speculations. Before Copernicus...

- Pluto="plutoid"
Pluto Does this satisfy everyone now? ""Plutoids": the new name for Pluto-like dwarf planets" by Jon Cartwright June 12th, 2008 physicsworld.com Pluto sub-classification The International Astronomical Union (IAU) has decided that Pluto — and other...