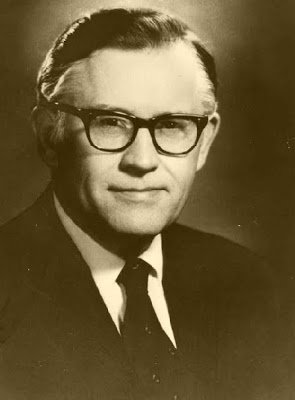 The New York Times
H. Guyford Stever, the chief science adviser to Presidents Richard M. Nixon and Gerald R. Ford, a former president of Carnegie Mellon University and the head of the committee that monitored the redesign of the space shuttle’s booster rockets after the Challenger disaster, died on Friday at his home in Gaithersburg, Md. He was 93.

Dr. Stever, an aeronautical engineer with particular expertise in guided missiles, was influential in the acceleration of the nation’s space program after the Soviet Union jolted Americans on Oct. 4, 1957, by launching Sputnik, the first man-made satellite.

Within three months, Dr. Stever, who had been chief scientist for the Air Force, was named chairman of a panel on space technology that played a key role in the formation of the National Aeronautics and Space Administration. NASA was established by Congress on July 29, 1958.

Almost three decades later, Dr. Stever’s expertise would once again play a role in restoring the nation’s confidence after another shock to the space program.

On Jan. 28, 1986, the space shuttle Challenger blew up 73 seconds after liftoff, disintegrating over the Atlantic off central Florida and killing its crew of seven. A set of so-called O-rings between the booster segments had failed, allowing exhaust gases from the rocket to leak and cause the explosion.

Dr. Stever was appointed by the National Research Council to lead the panel of engineers charged with overseeing the booster redesign.

Thirty-two months later, the panel concluded that the system’s “overall level of safety and reliability has been substantially improved.” And on Sept. 29, 1988, the shuttle Discovery lifted off for a successful four-day mission.

Dr. Stever had been named to lead the panel in large part because of his four years as science adviser to Nixon — a somewhat tenuous relationship — and Ford.

He had been director of the National Science Foundation, an independent federal agency that supports scientific research, when Nixon abolished the White House Office of Science and Technology; the president said he was not pleased with its advice concerning antiballistic missiles and supersonic planes.

Dr. Stever was Nixon’s science adviser for three years but was kept at a distance, for the most part meeting the president only at ceremonies. In 1976, at Ford’s request, Congress re-established the Office of Science and Technology, and Ford chose Dr. Stever to lead it. In that post, he worked to promote exchanges between American and Soviet scientists, supported efforts to commercialize solar heating and was effective at lobbying for financing of basic research.

In his time at National Science Foundation and the White House, the journal The Sciences said in 1976, “Stever has been the conscientious shepherd of the American scientific community during a time when zealots in and out of the community have been afire with wildly conflicting schemes concerning the scope, role and responsibilities of science.”

As an academic, Dr. Stever spent much of his career at the Massachusetts Institute of Technology, where he headed the departments of mechanical engineering, naval architecture and marine engineering while also holding a professorship in aeronautical engineering.

Horton Guyford Stever was born in Corning, N.Y., on Oct. 24, 1916, one of two children of Ralph and Alma Mott Stever. Both of his parents died of tuberculosis when he was a small boy, and he and his sister were brought up by their grandparents.

Besides his sister, Margarette Johnson, and his son Guy Jr., he is survived by another son, Roy; two daughters, Sarah Stever and Margarette Weed; and seven grandchildren. His wife of 58 years, the former Louise Risley, died in 2004.

Dr. Stever graduated from Colgate in 1938 and received his doctorate in physics from the California Institute of Technology in 1941. Within weeks, he went to work at the radiation laboratory at M.I.T. But he soon joined the war effort as a civilian working in London with a team of scientists assigned to assess German radar capabilities.

Shortly after D-Day, Dr. Stever and several of his fellow scientists went ashore at Normandy to locate and examine German radar facilities.

“They walked into a radar station and were captured by Germans,” Guy Stever said. “But the Germans knew they were behind Allied lines and surrendered to them.

“Dad told us that they all had a whale of a good party that night.”

- Nasa's Future
Maybe it is time to be realistic and turn NASA over to private enterprise. "House, Senate have different ideas for NASA's future" Commercial funding axed; no extra shuttle launch in plan by Bart Jansen July 21st, 2010 FLORIDATODAY.COM A House committee...