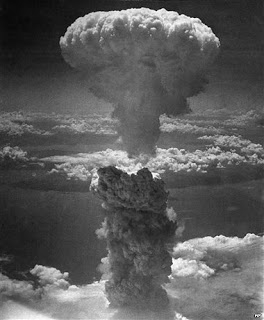 Sparing of two theoretical physicists--what a story of science and ethics. The focus of this topic is to discuss the implementation of programs developing and maintaining a nuclear arsenal [and potential deployment] and the ethics of such considerations. Part of the analysis is a function of global political temperament in post World War II and current climate--the balance of power issue.

2.) After a two year interruption during World War II he returned to his academic studies under the guidance of Igor Tamm in theoretical physics.

4.) Major contributor to the Soviet development/testing of the first thermonuclear bomb in 1953 and H-bomb test in 1955.

6.) Returned to theoretical physics--"baryon asymmetry"/"uneven disbursement of matter and antimatter in the universe".

7.) Strong political antinuclear proponent during the antiballistic missile defense issue between the Soviet Union and the United States.

["Reflections on Progress, Peaceful Coexistence and Intellectual Freedom" was a keynote paper. Unfortunately, I cannot locate a complete copy of the essay. It appeared in the "New York Times" July 22nd 1968 issue. If anyone can supply a full copy please provide a link.]

"Uncompromisingly and with unflagging strength Sakharov has fought against the abuse of power and all forms of violation of human dignity, and he has fought no less courageously for the idea of government based on the rule of law. In a convincing manner Sakharov has emphasized that Man's inviolable rights provide the only safe foundation for genuine and enduring international cooperation. In this way, in a particularly effective manner, working under difficult conditions, he has enhanced respect for the values that rally all true peacelovers."--1975 The Nobel Committee

"Sakharov: Person of the 20th Century"

3.) Contributor to theoretical physics in the 1930's--Jahn-Teller effect concerning crystal symmetry as determined by electron and atomic nuclei reactions.

6.) Major participant in thermonuclear weaponry and eventual testing of said weapon in 1952.

7.) He and his buddy Ernest Lawrence lobbied for a new weapon testing facility--now Lawrence Livermore Laboratory.

9.) Subsequent statements pushing for the H-bomb set a barrier between him and the scientific community for his lack of ethics. He too was ostracized.

"Edward Teller in the Public Arena"

"The death of a nuclear legend" by, Barton J Bernstein


Here are two brilliant men of theoretical physics that are passionately involved in their beliefs and goals: One [Andrei Sakharov] pleading for detente and restraint between two super powers, the other [Edward Teller] advocating continued nuclear weapon production.

I don't know that much about the physics of nuclear weaponry and was surprised about a particular feature of the hydrogen bomb in that it is an "unlimited" weapon in regards to megaton yield. The "slolika" [Soviet hydrogen bomb] was limited in megaton yield and that it was redesigned by Sakharov and Zel’dovich.

"The idea was to use the radiation (photons) generated by an initial atomic explosion to compress a tube, thereby igniting fusion within it. The design, similar to the Ulam-Teller one, had potentially unlimited yield because the length of the tube could be increased as required."

And, it was while he was at Arzamas-16 that Sakharov began his political changes about nuclear proliferation.

"The Metamorphosis of Andrei Sakharov: The inventor of the Soviet hydrogen bomb became an advocate of peace and human rights. What led him to his fateful decision?"

- Deceased--herbert York
Herbert York Novemeber 24th, 1921 to May 19th, 2009 "Herbert York dies at 87; scientist and arms-control leader" Herbert York, who was a delegate to the anti-satellite arms control talks in 1978 and chief negotiator in the U.S.-Soviet talks on a ban...

- "the Trials Of J. Robert Oppenheimer"--worthy
Okay, I sat through two hours of this documentary on the rise and fall of J. Robert Oppenheimer and must say that is one of the better offerings from PBS. Usually, "docudramas" flounder where the emphasis is placed on actors attempting to characterize...