A long trip for a short event to test an hypothesis 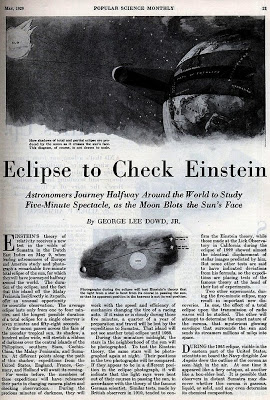 May 1929
Popular Science Monthly
[Click image to enlarge to read]

And yet another series of tests to confirm Einstein's postulation that light bends as written by George Lee Dowd, Jr. in the May 1929 issue of Popular Science Monthly.

- Einstein...3.14...birthday
Well, Albert Einstein's birthday will be on March 14th and, as being the most popular and probably most famous physicist, it is fitting to review some of the selections on Einstein somewhat early. Annus mirabilis-1905 March is a time of...